Today we re-launched the Embsay-with-Eastby Walls survey, which we had abandoned a few years ago due to various problems. 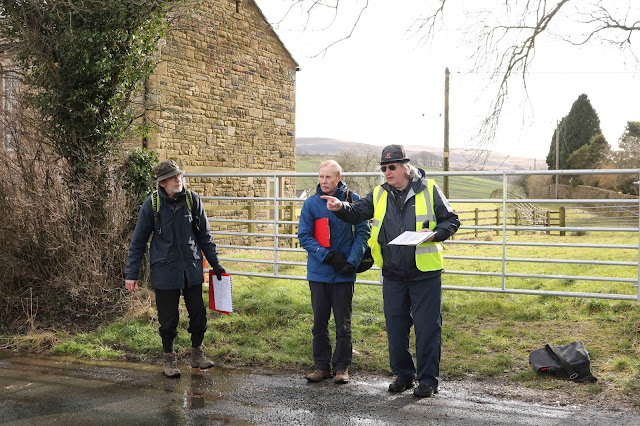 We (the old hands - myself, Chris & Tony) met our new volunteers at Bobbins cafe in Embsay Mills. After a bit of breakfast, Chris explained the project. Out came his copy of the 1847 Tithe map for the parish, on which Chris has allocated a wall reference number to each stretch of field boundary. Each of these will be photographed, and recorded with a description and measurements. Hopefully we will end up with a characterisation map from which we get some idea of how the field systems developed over the centuries. 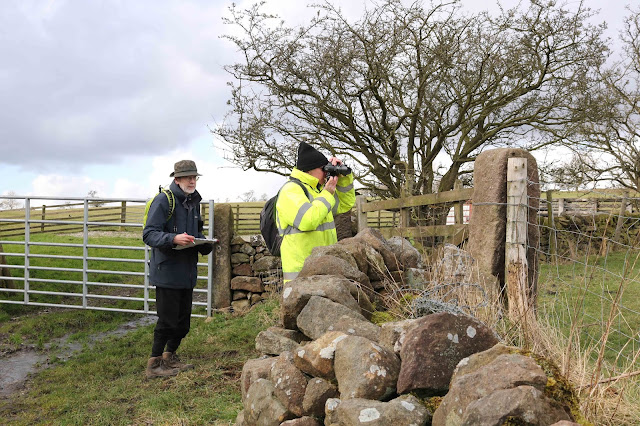 The weather held out surprisingly well, despite dire weather forecasts, so we set out for a training session along Brackenley Lane. It was a bit awkward as Saturday is a relatively busy day of the week for traffic along the lane, which despite being single track country lane, is used as a bit of a race track by some motorists. We split into two teams, although one team had to leave early for another class in the afternoon. The team which remained behind did extremely well, picking up all the recording processes without any difficulty, and we were very pleased with how much progress we made before the chill winds and sleet drove us back into Bobbins for a warming coffee.


Today we were back at Conistone, St Mary’s, to continue with the total station, kindly brought over by Toby from the DEBS project. He also brought with him two postgrad students, Laura and Erica, who wanted to learn about RTI photography.


Since Alan was away on holiday I demonstrated RTI, with Tony’s help, and then let the students carry their own RTI on a gravestone. 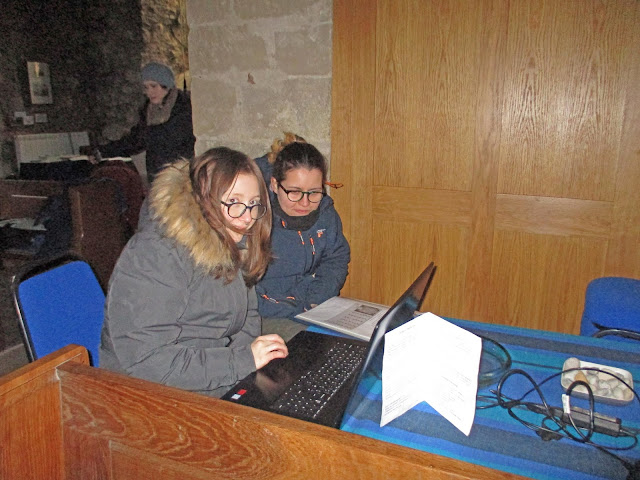 Then it was into the very cold church to process the photographs on the laptop – again I demonstrated the process, then let Erica and Laura process the second set of photographs by themselves.


They did an excellent job – picking up the whole technique straightaway. They were a delight to teach, and I really enjoyed my day with them both.


Meanwhile the others tried completing the GPS survey of gravestones on the north side – but as the weather started to close in they were hampered by various factors, and by lunchtime had managed 2 rows. Over lunch we could see the skies darkening and sadly, decided we had to call it a day.

Posted by Upper Wharfedale Heritage Group at 12:29 No comments:


Although it’s been a mild winter (yes, I’m on about the weather again, but it does have such an impact on our outdoor work!), we have had few opportunities to get out and get on with our photography at Skipton Holy Trinity churchyard.

At last, on Friday, the weather proved perfect for RTI. We had a successful day – all the technology worked, and there was enough shade in large parts of the churchyard to enable us to select several ledgers for photographing.

Neither did it rain, nor did we get gusts of wind. It was cold, but we warmed up in the church café at lunchtime. The only real problem we had was that many of the ledgers were still very slippery, so we had to tread carefully – wherever possible keeping to the narrow grass paths. It’s surprising how much that slows you down.

There is still much, much, more to do; but we felt we were making progress again.

Our advice to any other group carrying out a similar project would be to have patience – RTI is so weather-dependent that you need to be willing to wait for the right conditions – and that may mean several months before you complete the outdoor work on your churchyard survey.


We spent a cold dreek morning at Holy Trinity Churchyard today – a combination of wet stones from last night’s heavy rain, and the morning’s bright sunshine meant half the churchyard wasn’t suitable for any RTI photography of ledgers. However we did select a few up in the shadow of a boundary wall.


While I focused on taking as many ordinary photos of ledgers as I could and Sue carried on collecting data on gravestone measurements, Alan, Tony & Jennifer set up the RTI camera scaffold. But then they hit a snag as the camera and flash unit refused to work together. 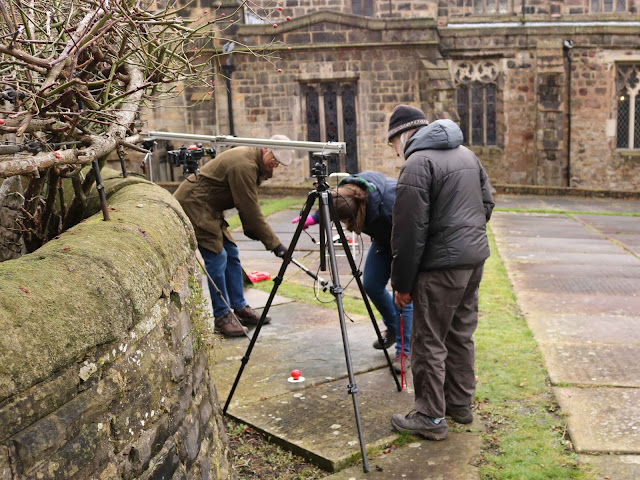 After several hours of only partial success with the RTI we called it a day. It had clouded over anyway, and was getting bitterly cold and drizzly.
We retreated into the little café at the back of the church and had a nice long chat over lunch before going home.

Sue and I spent half a day back at Holy Trinity churchyard, Skipton. Sue started on the measuring of gravestones and managed to complete all the uprights, before moving on to a row of ledgers. 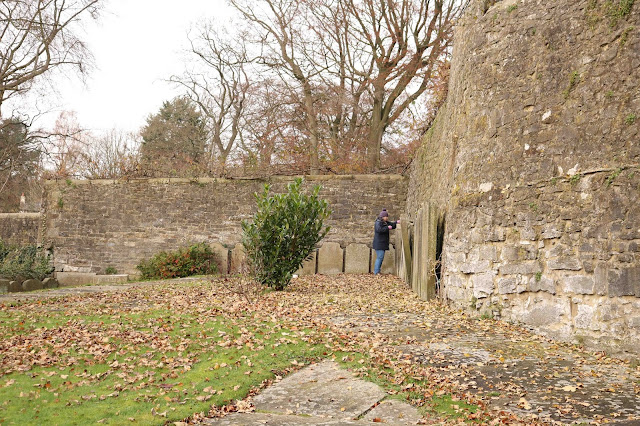 I was able to crack on some photography – as always with ledgers, cleaning them in preparation for photos took longer than taking the actual shots but at least it was a still day and there was no breeze to blow back the autumn leaves.

By 2pm we were so cold  we had to call it a day – a good excuse to get a late lunch at the new Bobbins coffee shop in Embsay.

Posted by Upper Wharfedale Heritage Group at 14:04 No comments:


We attended a day workshop at the King’s Manor, University of York. Our colleagues from the Friends of Raikes Road Burial Ground came along too and we were delighted to meet up with members of some of the other groups working with the project.


Toby Pillatt introduced us to his colleagues on the DEBS project, including Dr Debbie Maxwell, Professor Harold Mytum and Professor Julian Richards. We spent a thoroughly enjoyable day being updated on the progress of the DEBS project and trying out some of the prototype resources.

All too short a time was spent in the churchyard of nearby St Olave’s – for health and safety reasons normally closed to the public. Here we tried out the latest version of Harold’s paper-based forms for recording gravestones, as well as the mobile app.


The latter is still only in the very early stages of development but we can see great potential in it, despite some misgivings. We were able to make some suggestions on how it can be developed further.  Harold’s paper forms, on the other hand, are pretty much in their final draft. They are easy to use, and Jennifer and I sailed through them, entering data on a couple of gravestones.


Back in the lecture room we tried out some data entry onto the prototype database and made some suggestions as to how it can be improved for use by community groups such as ours.


The day finished with an informal chat about the potential of the project and ideas for the next phase.

Posted by Upper Wharfedale Heritage Group at 14:01 No comments:


We were very grateful today for Toby Pillatt (DEBS project) joining us as he brought along a total station borrowed from the University of York. 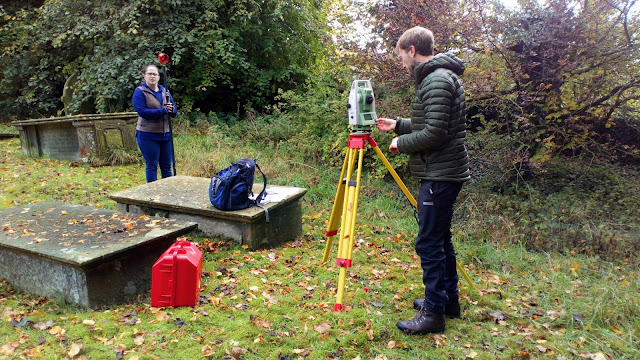 It took some time to set it up but once we got going we were, with his help and guidance, able to plot in the precise locations of all the gravestones on the south and west sides. At times there were interesting problems such as trees which broke the line of sight between the total station and the prism, but with all hands brought in to hold the branches back we were able to get all the readings we needed.
Sometimes the total station refused to take readings due to “wind turbulence” which we suspect was sometimes due to us giggling too much! So we hold our breath and tried again.

Having tried before to take GPS readings without any success due to the tree cover, it was a relief that the total station appeared to work well. Even when other gravestones initially broke the line of sight to one we wanted to record, we were able to use prisms of different heights to find the appropriate position to take a reading. 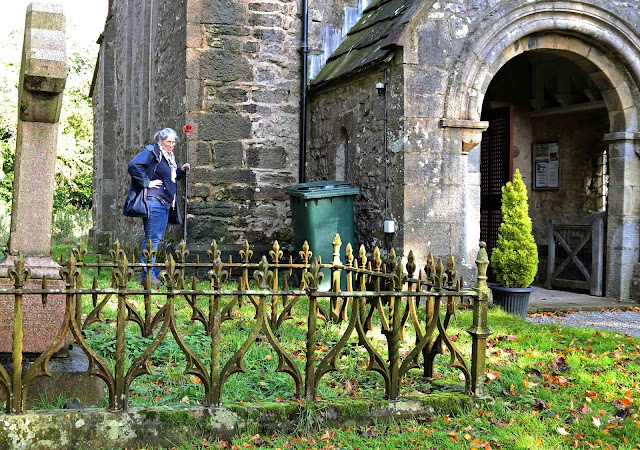 Our method was to always plot in the left side of an upright gravestone before the right side (ie. as you are facing the inscription). With box tombs and ledgers (recumbent stones) we always started with the top left corner and worked clockwise to plot in the other 3 corners. Where we had a surrounding feature (such as railings of kerbstones), or a secondary memorial within the same grave plot, these were plotted in separately, in the hope it will be clear on the final plan how they relate to the main memorial. Each gravestone was of course given its own code reference (generated by the total station) which we can later cross-reference to the grave-ID. 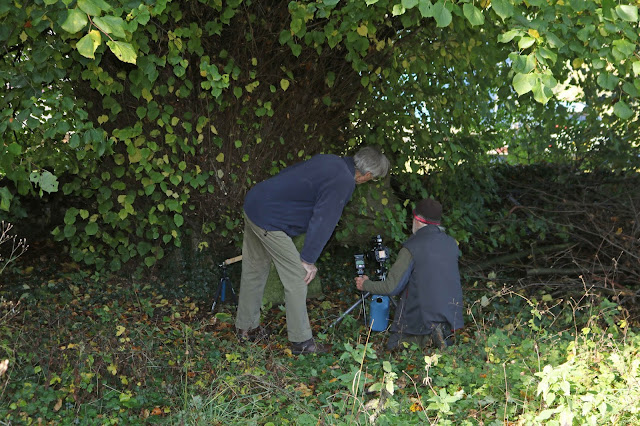 While 3 of us were learning how to use the total station, Alan and Tony caught up with some RTI photography which needed re-doing – the lighting conditions were much better than they have been on some days, in particular because there was no dappled sunshine on some of the memorials under the trees. 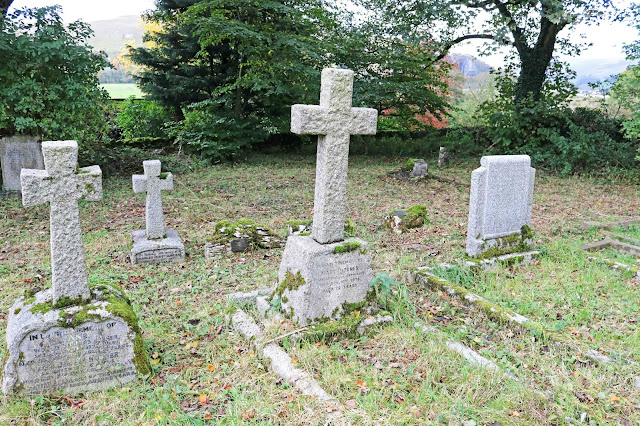 On the north side of the churchyard the church sidesman had arranged for extensive clearance of the old vegetation which was beginning to die back for the autumn – a huge amount of nettles, weeds and brambles have now disappeared, revealing more gravestones, which gave the photographers the opportunity to record them after they had been hidden all though the summer.


Our thanks to Toby – hopefully he will soon be back to help us finish plotting in the remainder of the churchyard.

Posted by Upper Wharfedale Heritage Group at 12:40 No comments: