The glorious weather of the past few days decided to fade a little but it was still a fine afternoon to be out in the fields. Three of us, with the farmer’s permission, went into one of the larger fields off Shires Lane in Embsay to finish off our survey of the walls there. By the end of the afternoon it had become quite grey and chilly with a strong breeze blowing our papers about – but we did get the Shires Lane section finished which was good work.

This is an interesting area of Embsay being at the edge of the settlement – with signs of ridge and furrow clearly visible (probably Napoleonic period), and a very old boundary lying alongside one side of the field we were in. 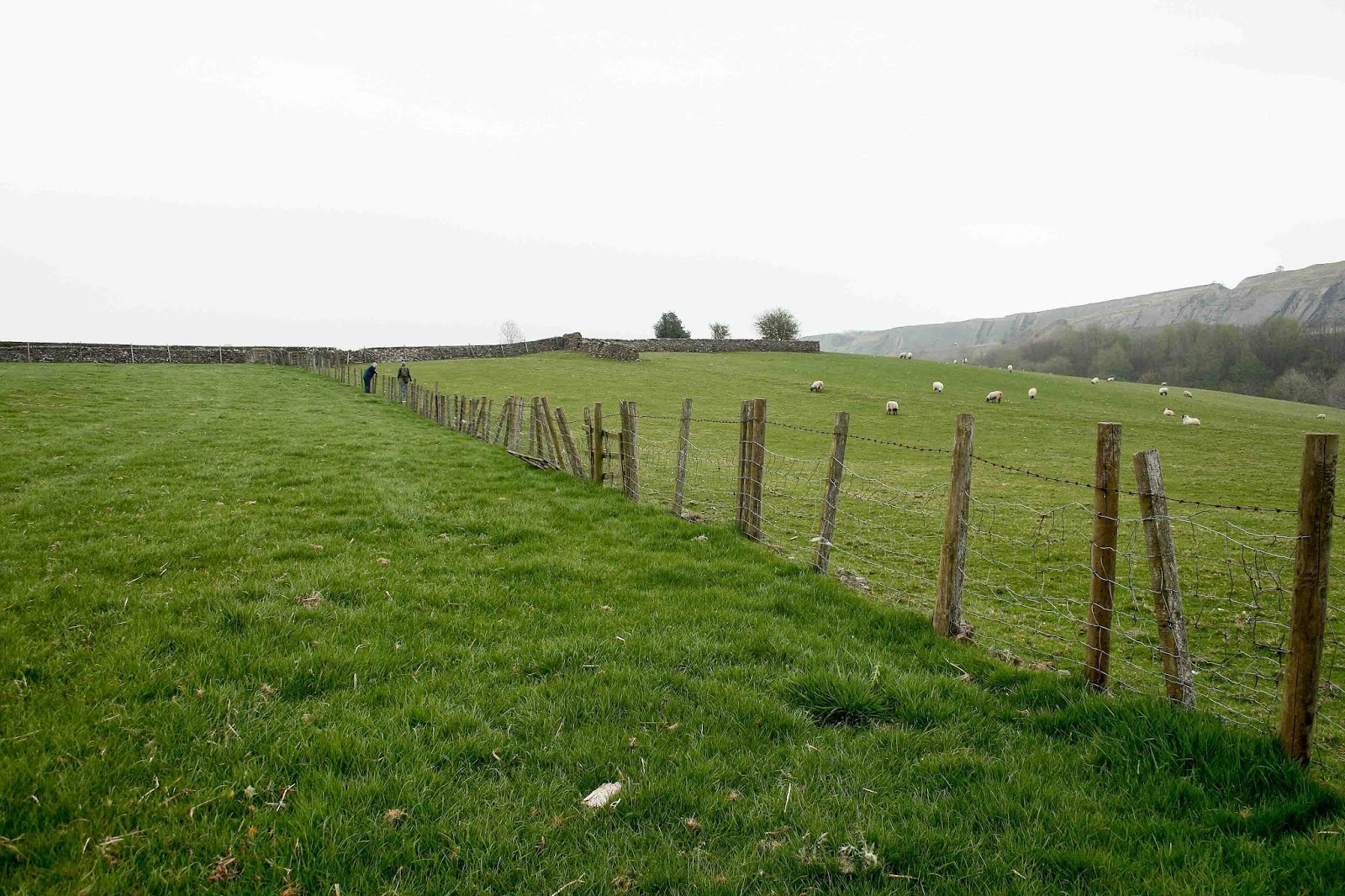 The above photograph shows a plain wood and wire fence – nothing much to spark any interest? Far from it. 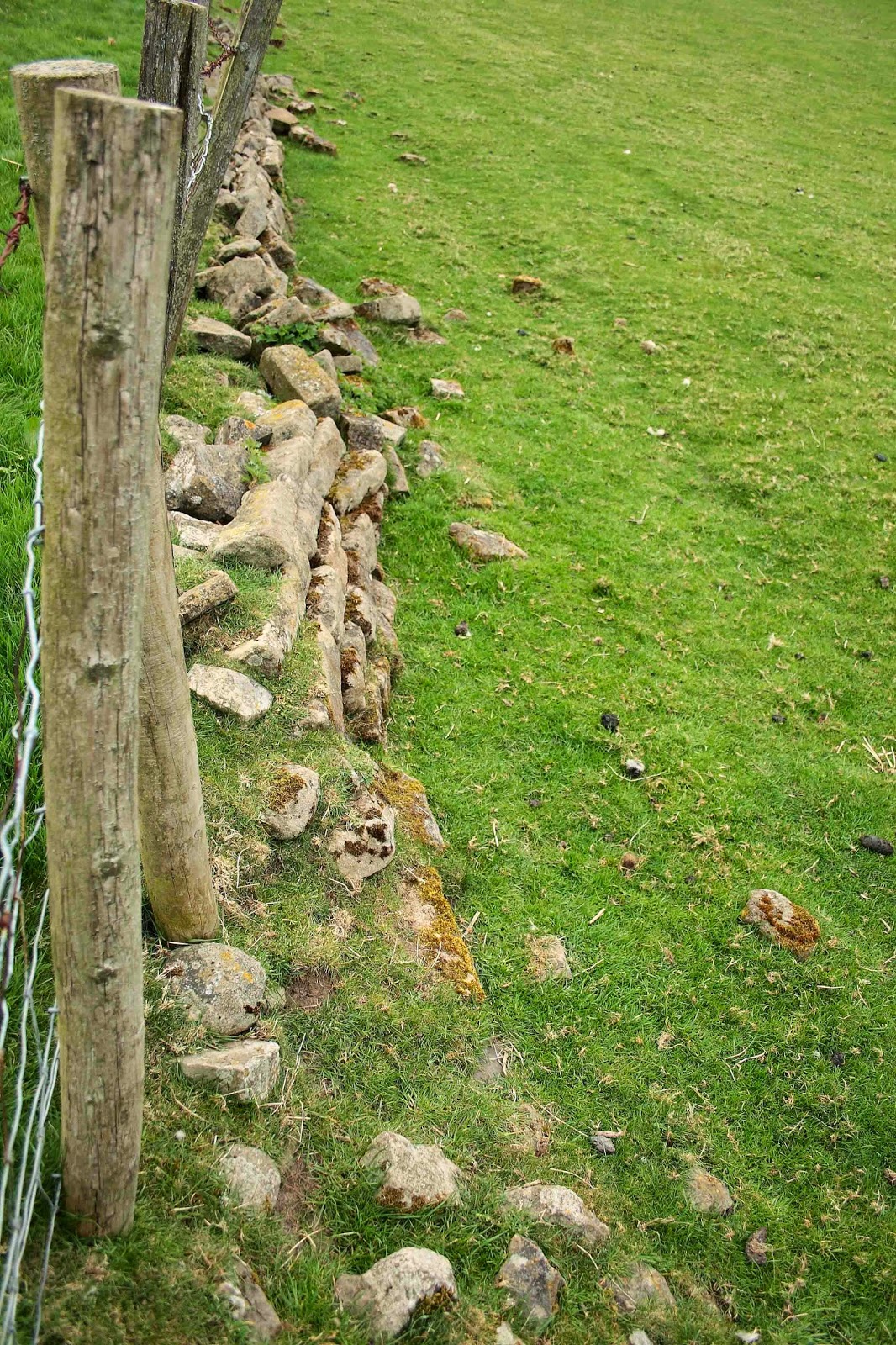 For this is what lies on the other side – a beautifully stone revetted bank – almost certainly medieval in origin – and very likely to be one of the few remains of the monastic estate of Bolton Abbey in the parish. 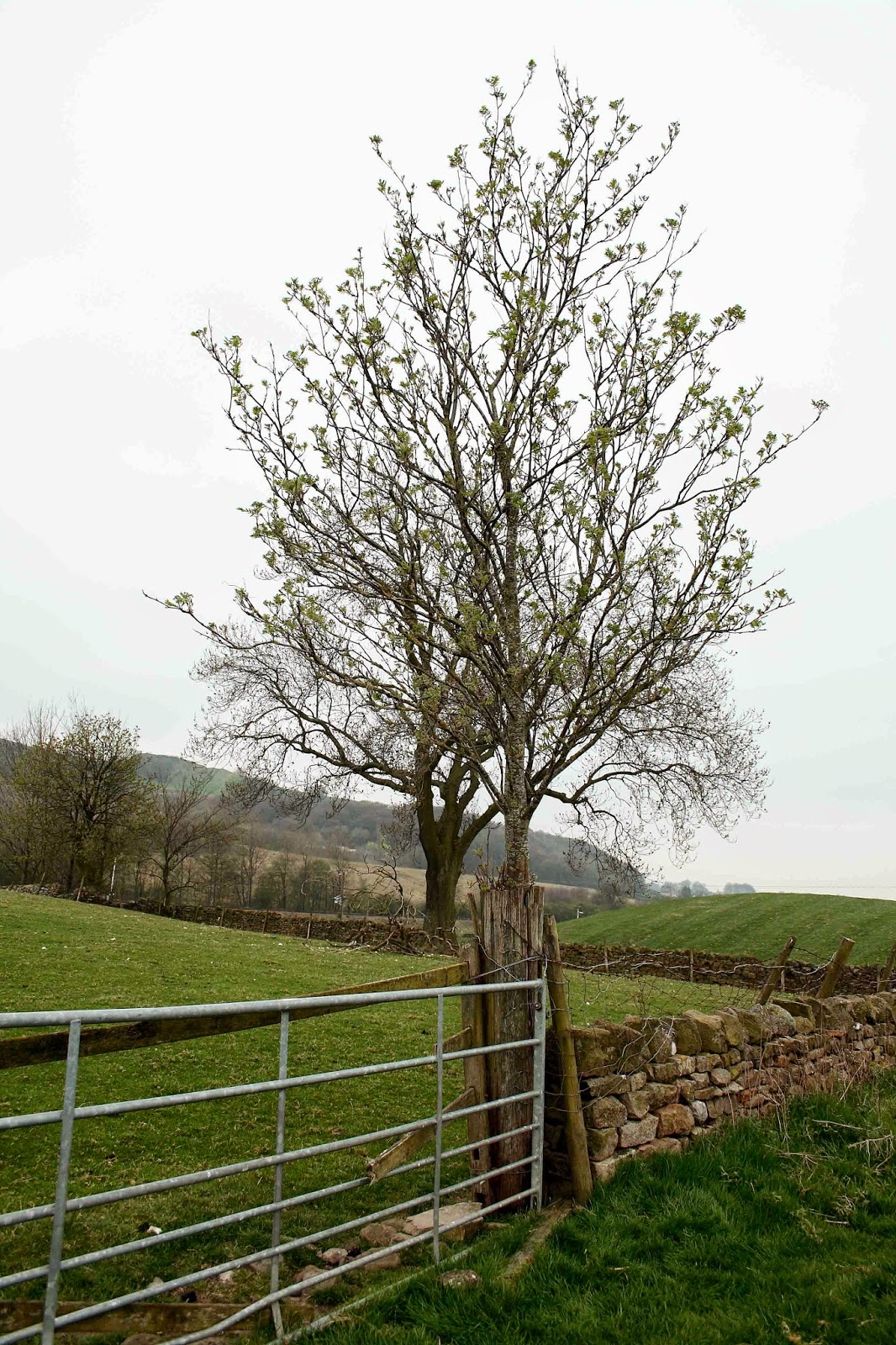 An unusual sight was this little tree – look a little closer and you can see it’s actually pushed its way up through the middle of what was once a solid and sturdy wooden gatepost! 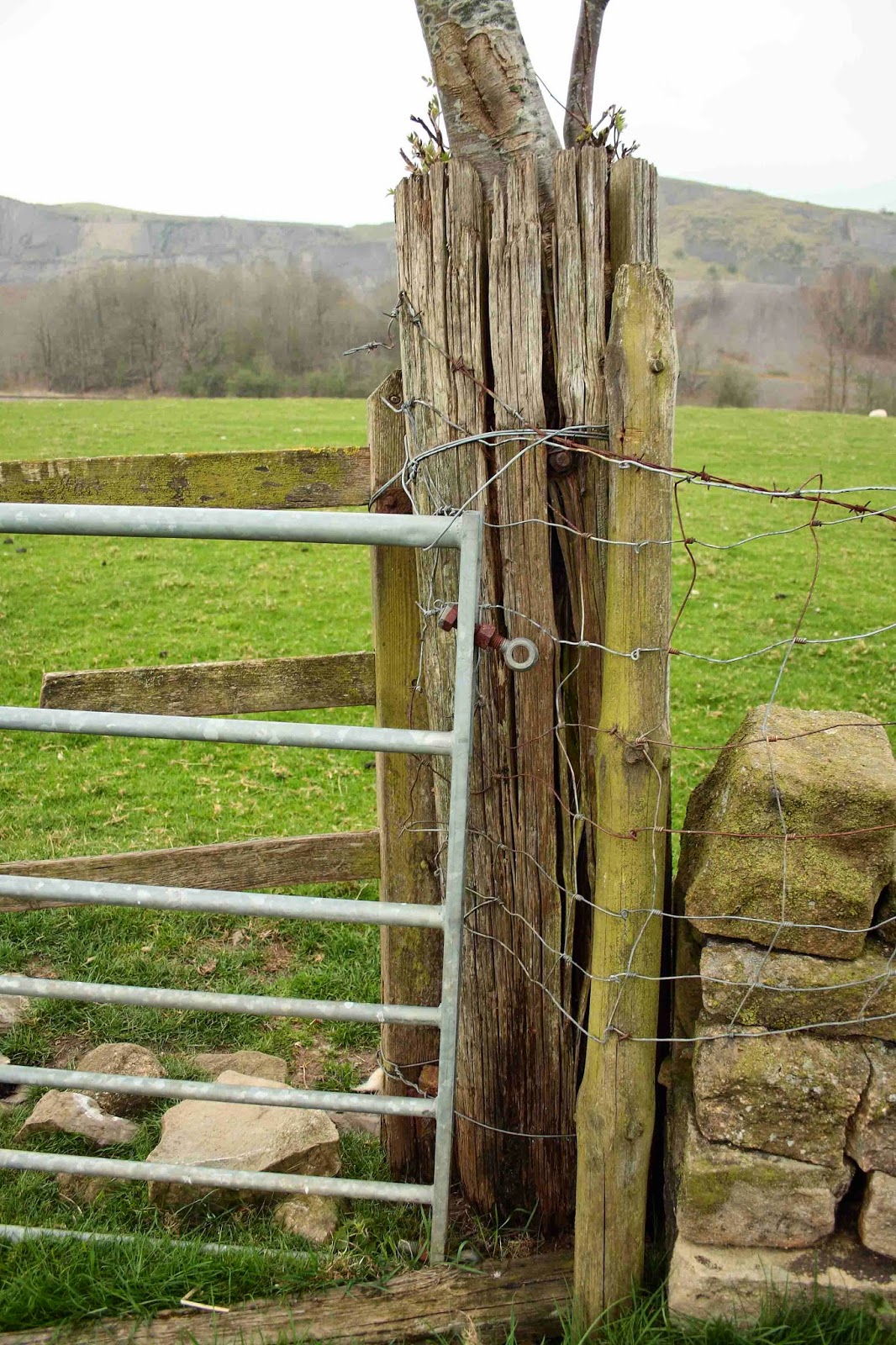 Even having a great big bolt hammered straight into it hasn’t deterred this tree – it’s alive, healthy and still growing, splintering the gate post apart! 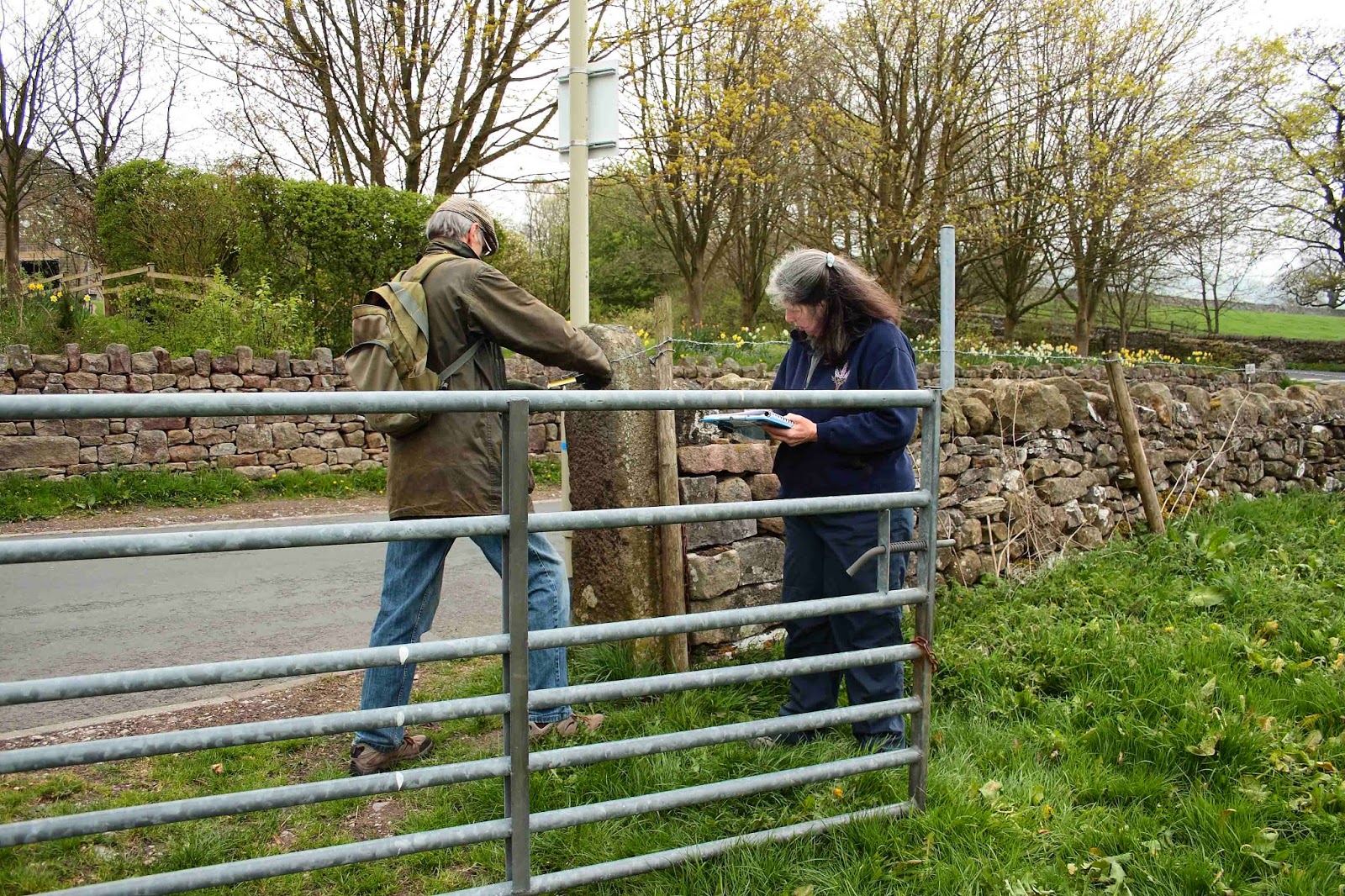 As we were finishing off the recording of this Georgian stone gate-post we were greeted by three very lively and friendly dogs - two spaniels and a black Labrador – out for their afternoon run, and straining to be let off the leash! We had a nice chat with them – and their owners too, of course – before heading off back down Shires Lane, recording the last stretch of roadside wall as we headed towards home.

6 of us were due to start RTI photography at St Mary’s churchyard today – the beginning of an exciting project to record all the graves in the village church.
But the unpredictable Yorkshire weather was against us – having been a beautiful spring the day before, Wednesday was grey, damp and windy.

Nevertheless we had a productive day, and as things turned out it was probably a good thing as we used the time to sit down and think through some of the logistics of the project in more detail. We discussed the format of our record sheets, what we wanted to record, why & how, in order to effectively combine the different aims and objectives of the 2 groups involved in the project.

We wandered around the churchyard to assess how many of the gravestones would present particular difficulties, and were pleased to find they were relatively few in number. 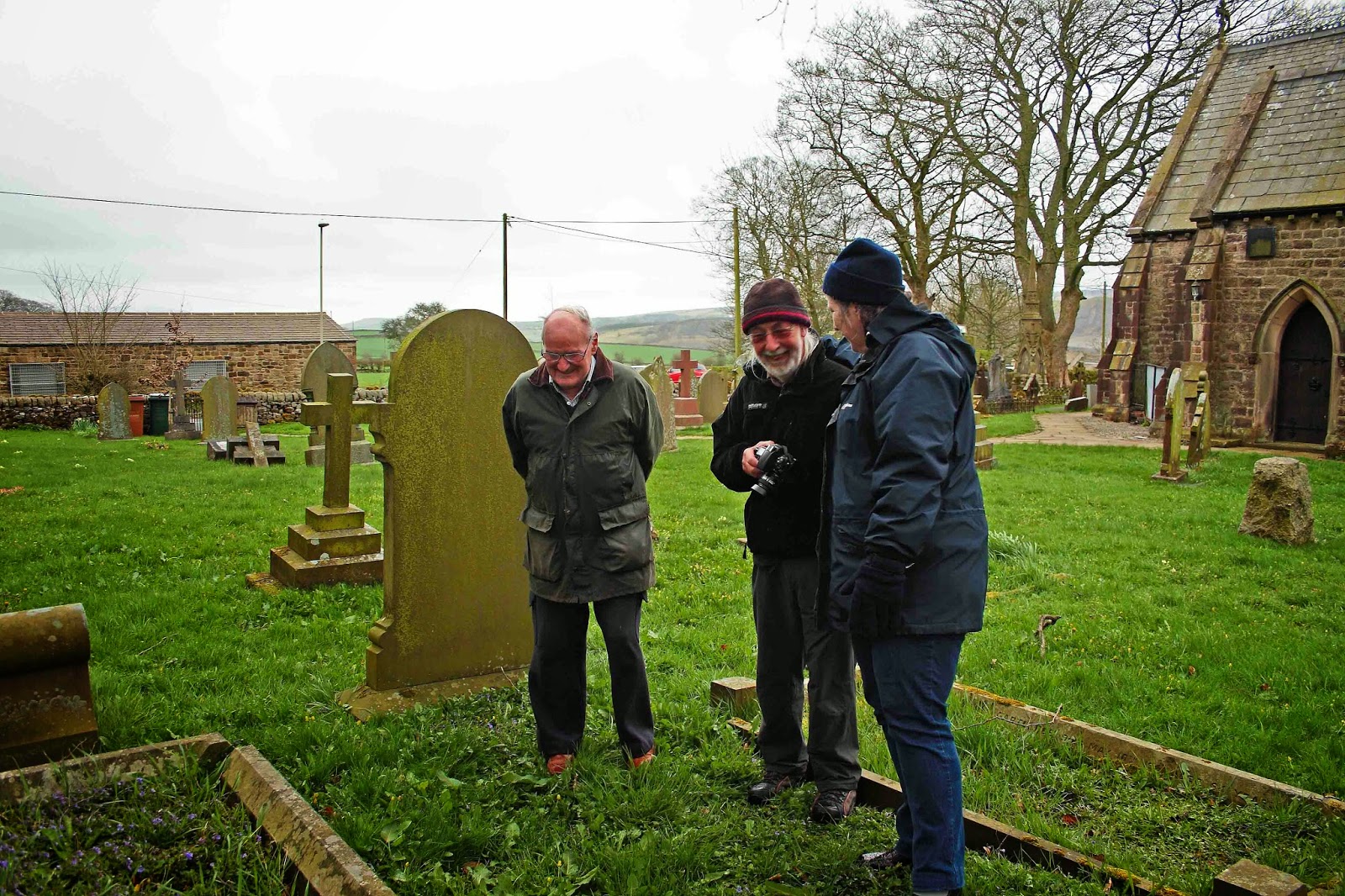 After an early lunch – and some of Sue’s delicious chocolate cake (unfortunately I didn’t get to one of the flapjacks in time) – we ventured outside again into a dreek afternoon, still too blowy for RTI. Sue and Alan explored the site to establish the best locations for the fixed reference points to be used when plotting exact locations, while the rest of us started filling out some  of the record sheets to see if they needed further refinement – so we selected a row of stones to measure and give physical descriptions. It proved a useful exercise as we found a few extra pieces of data which needed to be included.

We were getting cold though, and even a little wet in the drizzle, so called it a day mid-afternoon. And wouldn’t you just know it – the sun came out and the breeze dropped about half an hour later!

On a glorious spring day 4 of us resumed the survey of Embsay’s field walls.
Having obtained the kind permission of local farmers we were able to go into two fields and take a close look at several walls. Although none of them seemed particularly old (relatively speaking!), the signs were there that they had all undergone interesting repairs and modifications over the past 2 or 3 centuries. Many of the walls around here have obviously been re-built in relatively modern times; some we know were rebuilt very recently (less than 20 years ago), but stand along the lines of older boundaries.

In view of the housing developments planned and proposed for fields off Shires Lane our priority at the moment is to record the walls and features in these fields. The first field we went into will soon be gone under the concrete and no doubt all the walls will be taken down.
The views down to the quarry and the railway may not be the most beautiful in the Dales, but they are interesting, historic and part of an open countryside which gives Embsay its character.

We had a hearty lunch at the Elm Tree Inn before returning to the second field we were surveying at the other end of Shires Lane. This field is under threat but not yet condemned. It retains interesting features on the ground which may be geological rather than archaeological.

We came across a curious little ruined building, approximately 5 metres square, its original function a bit of a mystery standing as it does in the middle of the field, built into the slope – not big enough to be a barn for housing cattle, so perhaps for sheep or a small hay store. The Tithe Map shows that it originally stood close to a wall which has now disappeared completely.

There was a sadness about the day in that we knew that even the “modern” walls marked much older field boundaries – these fields will soon be gone forever as the march of the ubiquitous characterless housing estate swallows them up. The open vistas will soon be gone and the rural character of historic Embsay whittled yet further away.