Saturday 11th August 2018
While staying with a friend in London for a few days, and in-between our visits to the BBC Proms concerts at the Royal Albert Hall, my friend took me around one of London’s “Magnificent Seven” Victorian cemeteries. 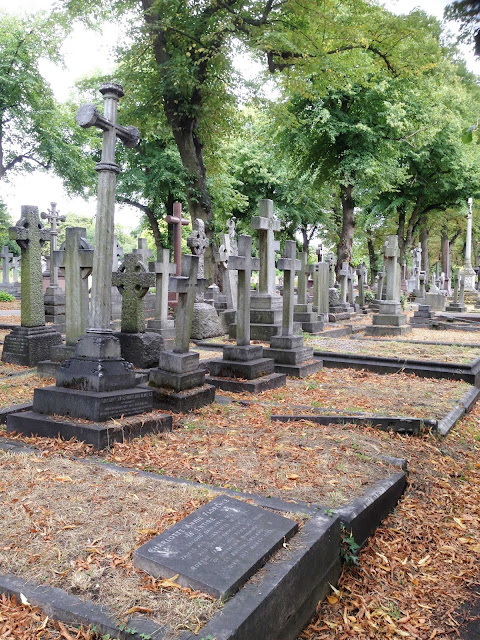 Brompton Cemetery is easy to get to, being right next to a underground station. We approached the magnificent entrance and found ourselves immediately tempted by the café situated there.
I highly recommend this little café – we sat outside in the warm sunshine eating delicious tartlets while looking over the long, wide central driveway. It’s an excellent place to people-watch. There is no entrance fee so all sorts of people come here to stroll, to cycle, to walk their dogs and go jogging. Yet despite this being true to its original Victorian ideals of being simultaneously a cemetery, as well as a garden park, the peaceful atmosphere is retained. The character of this cemetery is very different from Highgate Cemetery which has perhaps suffered somewhat from its “Victorian gothic” reputation, and plethora of famous graves. Brompton is much more open, and light, based around a wide ceremonial drive taking you straight to the grand Chapel flanked by two great curving arcades. 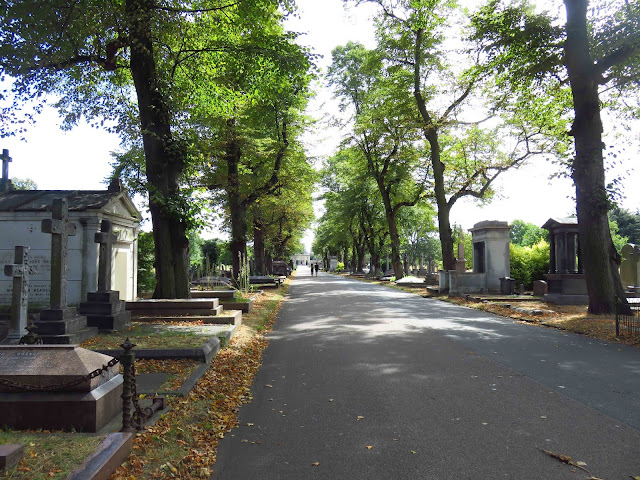 My friend and I only had a few hours in hand before we were due to make our way to the Royal Albert Hall, so we decided to simply stroll up the drive and then back again, looking at the monuments just to our left as we went. Occasionally we made a small detour when a particular monument down one of the side paths caught our eye.


And so we took in the most ostentatious of the memorials which stand where everyone could see them on their approach to the chapel. There are a huge variety of monumental crosses of course, and the obligatory angel or two. Many of the bigger plots alongside the central driveway have somehow kept their old railings, whereas in other burial grounds most have long disappeared, swiped as a contribution to the war effort in the Second World War. Here you can therefore see how beautifully ornate the iron work could be in Victorian graveyards.
Brompton also has a good number of wonderful arts and crafts, art nouveau & art deco examples of monuments which are just stunning. The most famous is the magnificent chest tomb dedicated to the shipowner & businessman, Frederick Leyland, who died in 1892. 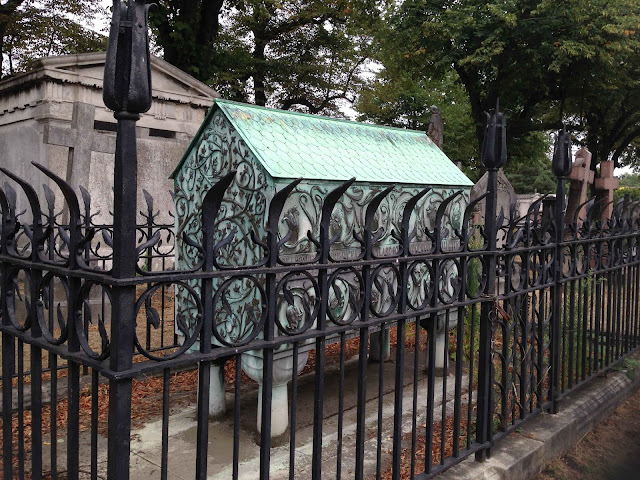 As a patron of the Pre-Raphaelites he was rewarded with the most beautiful monument, designed by no less than Edward Burne-Jones.
But there are several less showy, smaller examples of the genre which are works of art in their own right.
The High Gothic which so predominates in Highgate is less common here, but there are still some outstanding examples, including some impressive mausoleums.
There are quite a few historic figures buried here, and of course, you can’t help but try to seek them out. I was impressed by Emmeline Pankhurst’s art deco cross (although she’s not my favourite suffragette, she definitely gets brownie points from me for her grave monument!).
I rather liked the fact that suffragette colours were used in the ephemeral furniture and flowers which have been placed at the base. A very good illustration of how important ephemera is when considering the symbolism and cultural significance of funerary monuments.


As one would expect in a large city cemetery there is a wide diversity of cultural and social groups represented. At Brompton there is a particularly large number of military graves, including Chelsea Pensioners, and many orthodox burials which can be identified by the presence of the Byzantine or Suppedaneum cross.
On a more familiar theme we came across the occasional weeping maiden draped over an urn or sarcophagus, an agnes dei, chi rho, and a huge range of pedestal crosses, many of which were celtic-revival style.
We will definitely have to return next year for a stroll around the flanking areas, beyond the sight of the main promenade where the less showy monuments and headstones lie – and pay another visit to the café, of course.