Well it was four seasons in one day today which was quite fun!

Despite the chilly temperatures it started out as quite a nice day and five of us set out on surveying and photographing the gravestones on the east side, and ledgers in the “Garden of Remembrance”.

There were spits and spots of rain which forced us in for an early coffee break, and again for an early lunch, to give our cameras and papers time to dry out. We felt sorry for the men on the church roof who continued working in the rapidly dropping temperatures, under increasingly grey skies.

In the afternoon, there was an ongoing battle with the elements – in-between a series of short but heavy falls of hailstones we retreated back inside the church, and then snatched a few minutes more photography before dashing back in again as the hailstones came back.

There were a few visitors to the church today – despite the weather it is the beginning of the tourist season, and passing ramblers and strollers often pop into St Mary’s. Let’s hope none of them got caught under the hailstones which came down about 3 pm and settled so thickly on the ground that it looked as though it had just snowed. 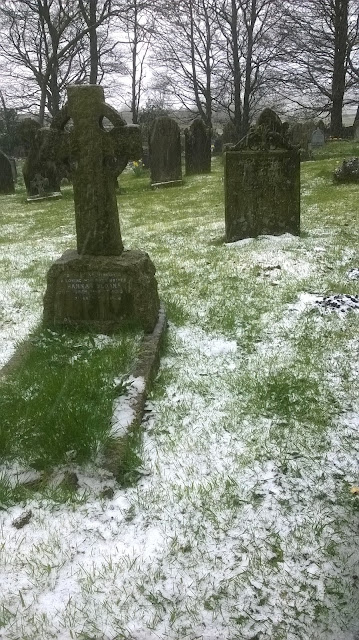 At that point we surrendered and went home!

Posted by Upper Wharfedale Heritage Group at 15:36 No comments:

What a glorious spring day it was! Of course, that made it very difficult for the RTI – photographing the ledger stones in the Garden of Remembrance area of the churchyard proved awkward because the bright sunshine threw out the flashlight which is needed to create the various angled shadows which make the inscriptions legible. Hence, Sue had to spend half the day with her nose up against a large piece of plywood in a bid to eliminate the sunshine.
Eileen and I however were able to fully enjoy the gorgeous weather by measuring and recording some of the gravestones at the west side.
We had satisfying lunch at the Elm Tree Pub while a funeral service took place in the church. Afterwards, when the cortege had gone to the crematorium in Skipton, we returned to carry on with the churchyard survey.

It’s a long time since we worked in the sunshine, and it made for a very pleasant day.

Despite a favourable weather forecast we found ourselves out in a cold, breezy, damp spring day.

In the morning Jennifer and Jane started out with good intentions to measure up some graves on the west side. No sooner had we started than it began to drizzle, making our record sheets wet, so we retreated inside the church.

Despite some rather long coffee and lunch breaks because of the weather, we did actually make a start on some data entry onto our laptops. 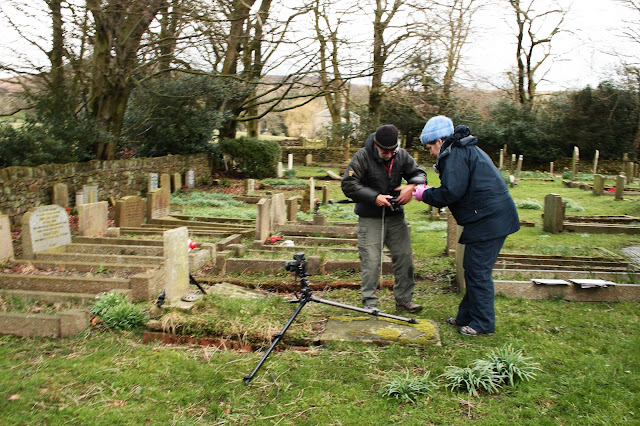 After lunch, Alan and Sue braved it out to do some photography outside, but I decided to stay inside the church, to keep (relatively) warm, and type up some data instead. 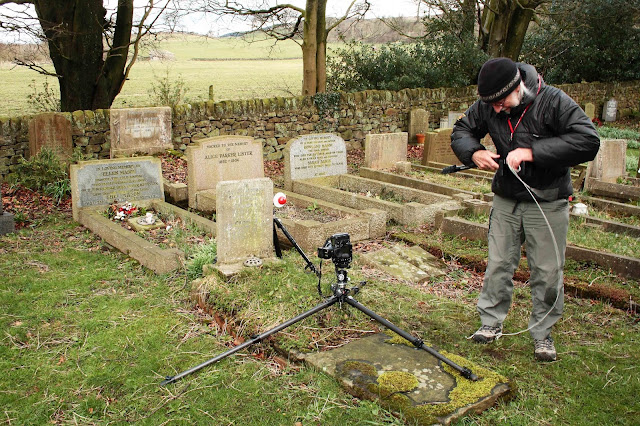 The weather has been unkind to this project - causing considerable delay in getting the RTI photography done, but otherwise the project is going very well. As we collate the data we are finding lots of connecting themes, and developing lots of ideas for interesting ways to analyse the data.