We had another good session at Skipton’s Holy Trinity Churchyard on Wednesday. It threatened to rain but the sunshine came through for us, and it wasn’t too cold. The autumn leaves took a bit of sweeping away for the purposes of photographing the stones, but they look very colourful and lovely. 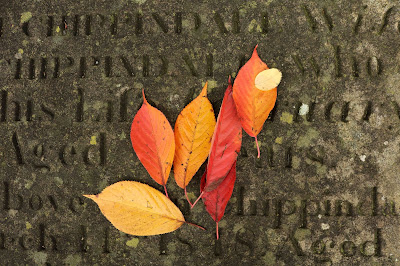 We continued the work of transcribing the legible inscriptions, and photographing the ledgers.


When I got home I found that the photographs I took before my morning coffee break were rather unfocused while after I had had my brew they were rather clearer! Still trying to catch up on being so tired after all the preparations and the delivery of the Armistice centenary event at Embsay, that the early morning photos I took at Holy Trinity were very blurred. The coffee helped me keep awake and a bit steadier with the camera! So I shall have to re-take the first set again next week.

In the meantime, I shall be going through all the photos I have taken so far at Holy Trinity and organise them into digital folders. Then I think I shall start to attempt a simple classification of them all according to form and design.

On Thursday evening I was giving a talk to the Malhamdale Local History Group.

The meeting room was packed, and the audience seemed to be interested in the concept of gravestones as something more than simply sources of genealogical data. I hope I have inspired some of them to look at gravestones in a different light. My thanks to the Malham LHG for their welcome and interest.

Posted by Upper Wharfedale Heritage Group at 14:21 No comments:

What a weekend it was! The centenary of the 1918 Armistice has been our obsession for nigh on 6 months or so.

It was about a year ago that Vince Smith, of the Embsay-with-Eastby Parish Council, invited Embsay Research Group to contribute towards an event he was planning to commemorate the centenary. We pooled our ideas, along with the W.I. and the Embsay Steam Railway group – and over the months the ideas grew and developed, and the “event” got bigger and bigger.


But hopefully all the angst and hard work, and all those late evenings researching and writing (often into the small hours of the next morning) have all been worth it.
Vince needn’t have worried that no one would turn up – the turnout was wonderful – thank you to all the villagers of Embsay and Eastby for supporting the event.

We had tried to offer something for everyone – a large history display by ERG explored a range of topics, including everything from military casualty figures and animals in war, to the women poets and Lloyd George’s beer.

A series of small cameo performances by members of the ERG, and friends from the village, explored the lives of young women during the war, the Belgian refugees, fashion tips, household hints, the Spanish flu, and the Khaki election of December 1918.

A hour’s show – to a packed village hall – presented readings from contemporary newspapers and journals, poems, and songs accompanied by a slideshow.
There were re-enactments by Skipton Academy students of soldiers returning to their families and sweethearts at Embsay Railway station, and an afternoon tea party provided by the W.I. and accompanied by entertainment from local villagers.

The usual morning ceremony was held at the village war memorial on Sunday morning – attended by a very large number of people – and in the evening a special dusk ceremony was held, where children laid down hand-painted pebbles dedicated to the soldiers who died, along with small candles, as a silent slideshow of the men’s names was projected to the side. I think the large number of people who attended found it extraordinarily simple but moving. And the reading of Sassoon’s poem “Aftermath” was particularly apt to close the whole weekend.

There were so many people involved in putting this weekend together, and making it so successful, the list would be too long to put here, but they all deserve huge thanks.