One of the lessons we have learnt over the course of this project is that you need to assume that every detail is important no matter if it seems insignificant at first.
Now that we are more familiar with our gravestones and the cultural history bound up with them we are returning several times to re-take photographs and more detailed measurements. Such details as the very small carved motifs, the shaping of mouldings at the sides ; these should be recorded with as much care as the inscriptions.

When the weather permits we now take the opportunity to go back out into the churchyard and fill in some of these gaps with new measurements and photos.  Today was such a day and we enjoyed a nice day out in the open, while Jen rested her sprained foot, sitting at the laptop inside the church entering the new data.

Much of the afternoon was taken discussing arrangements for the weekend workshop we’ll be running down in Sussex soon. We conducted a test planning exercise using triangulation and scale drawing to assess the best scale to use for a churchyard. We have been lucky at St Mary’s Embsay in having a good plan already for the grave plots, but this is not available to everyone and we are aware we will probably need to make our own plans when we survey other churchyards.
Speaking of which, we were pleased to make contact recently with the new project co-ordinator for the churchyard survey at Long Preston near Settle. We wish them every luck with their project and look forward to helping them in any way we can. It’s an exciting prospect to see others working on gravestones in the Dales.


And congratulations too, to Gareth and Nicole Beale for securing funding to develop their project at the University of York – “Discovering England’s Burial Spaces.” (more information at:  https://www.york.ac.uk/digital-heritage/events/debs-funding/)
Hopefully this will lead to the creation of a national database which will allow little projects like us to share our data and run comparative studies which will be meaningful on a national scale. We are genuinely excited about this project and its potential and feel very privileged to be involved.

We ventured outside again in order to catch up on some of the missing photos that were needed, and to re-shoot those which needed better photos. It’s surprising over the past two years how much we have learnt about making a photo record and the details we should record – at the beginning of the project two years ago it didn’t really seem that important to photograph close-ups of little details such as motifs, mouldings, de-lamination, etc. Now we are much more aware how important such little details are in analysing the gravestones for their design features, condition monitoring, and stone masons’ idiosyncrasies.

The weather was a little variable but for the most part excellent for RTI purposes – dull, dry and wind-less.
Some stones needed the RTI re-doing, now that we are a little more proficient at the technique than we used to be; and some stones needed new photos as the old ones were not clear or detailed enough.
We have found that full-scale RTI is not always necessary – the use of a flash light on a single photo shot is sometimes enough to reveal difficult-to-read inscriptions. So we decided we should try some “flashing in the churchyard” today. This rather unfortunate phrasing had us giggling like schoolchildren, but by the end of the day we had come up with a new terminology for the technique – “oblique lighting” – not so much fun, but better for use in polite company....

We had visitors too – a little group of visitors from Germany who were interested in our parish church, and later a passing little group who were walking up Kirk Lane, and stopped out of curiosity, wondering what on earth we were doing in the churchyard.

We invited them in and explained our project, and showed them some before and after RTI photos – which greatly impressed them. It’s always such a pleasure to share this project – we find most people are surprisingly interested when we explain what we are doing.

In the afternoon we had to sit down inside the church and have a lengthy discussion on project management – we find ourselves being invited to share our project findings and help several other groups launch their own churchyard surveys. This is though, one of the joys of a project like this, and we really enjoy this aspect. So we discussed various options and plans, and have each come away with lots of preparation to do for presentations, workshops and photo shoots which are coming up over the next few months.

I’ve been in London for a few days and with a friend (who has been persuaded to appreciate gravestones – she has even spent a couple of days with us on our survey in North Yorkshire) took the opportunity to visit the famous Highgate Cemetery. Born and brought up in North London, I know I have been there as a child, but remembered very little about it. It is an extraordinary place, but the volunteers who run the place have a huge task on their hands to maintain it. The main circular path is well-kept – of course, this is lined with all the most ornate and showy monuments, as you would expect. 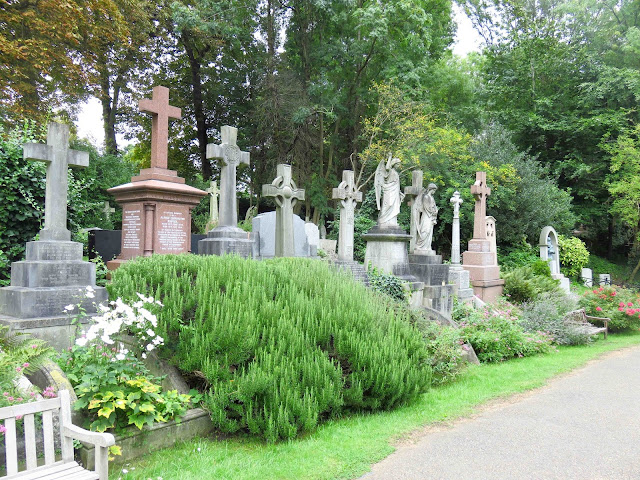 Off the main paths are side avenues, some more “romantic” than others, under the shade of trees and undergrowth of thick ivy. The grave plots here are crammed in so tight you cannot get close to the masses of ivy-clad gravestones behind them without stepping on another memorial plot. 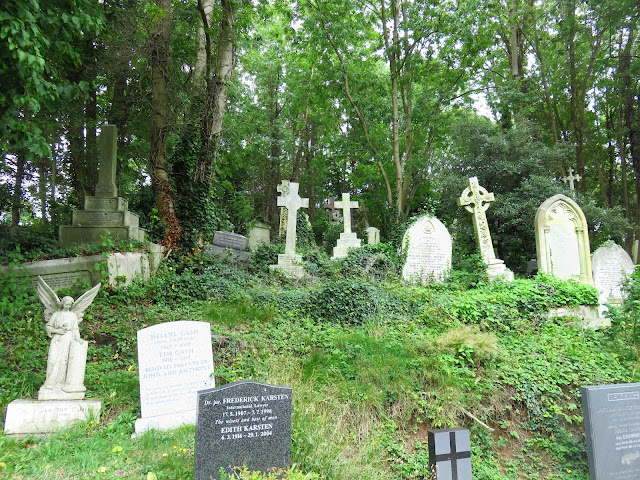 The great majority are tilting, and many have parts missing or broken – the result of years of neglect before the present day Friends of Highgate Cemetery were formed and took on the huge task of caring for the place. New graves are still being added – along the main path especially, there are many modern gravestones nestled against Victorian counterparts. 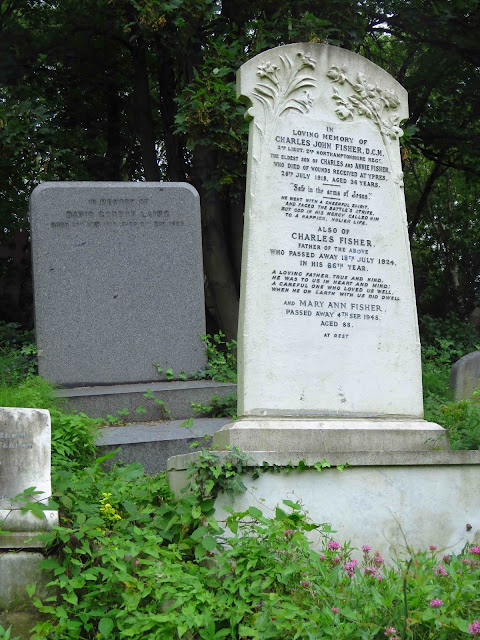 The curious mix is enchanting, as is the cosmopolitan mix of nationalities and cultures represented. Many of the latter are clustered together in their own zones, while there are other areas where different cultures lie in a diverse mix.

Highgate Cemetery has a very different atmosphere to Arnos Vale in Bristol – the latter feels like an open space, a garden landscape where people go to stroll or walk the dog – which was one of the original intentions of large urban cemeteries; at Highgate there is more of a sense of inner reflection and meditation, which can feel quite morbid and “gothic”. The monuments – whether hidden or visible – take centre stage rather than the landscaping which has long disappeared under the ivy and the overcrowding, creating a romantic atmosphere that many visitors may find a little forbidding. For me, of course, there was the sheer frustration of not being able to investigate the gravestones, and look at them in detail. That apart, I found it very beautiful and charming. The volunteers are doing a wonderful job against huge odds – and proved very friendly and helpful too.

Large privately run cemeteries like this are such a stark contrast to the little parish churchyards that we are currently studying. The ostentatiousness of the larger Victorian memorials is sometimes even outstripped by modern monuments in such places. Apart from the sheer size of many of the memorials along the main path, the variety of types of crosses and angels was particularly striking at Highgate. It is sad, though, that the vast majority of Victorian gravestones of a more modest and typical form will probably never be revealed, but will forever lie hidden under the thick growth of ivy. This does give a somewhat distorted impression of the nature of Victorian memorialisation. 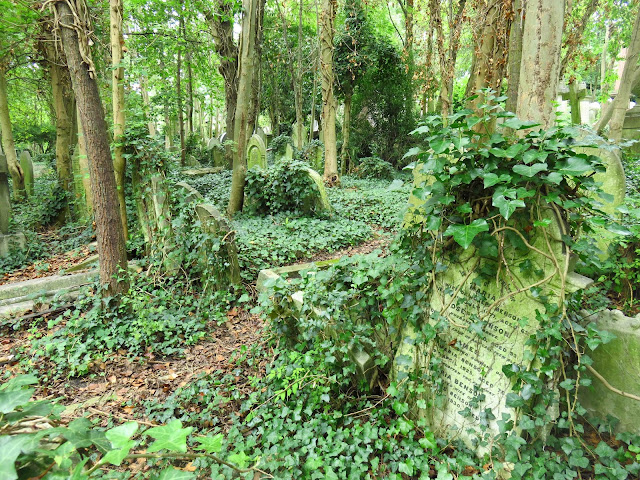 On the other hand, it does make for a lovely nature reserve - and a haven for local cats to explore.

Unfortunately we were unable to visit the West Side which is only accessible by guided tour – We fully intend to book a tour well in advance next time.