We had another good day typing up Grave Reference Sheets.
Included amongst the survey forms was one for a very small headstone that is barely legible. But the wonders of RTI reveals the inscription clearly. This was the memorial to a Belgian refugee of the First World War, who died at the local Sanatorium.
The inscription reads:
To the memory of Leopold Joseph Van Duyvenboden, Died Nov. 28th 1917, Aged 22 Years.
Belgian Refugee since Feb. 1915, & late guest of the Walton le Dale Wesleyan Congregation.

This plain, unassuming little headstone is a wonderful piece of social and local history – At once we are drawn into not only an emotional response to the death of this young man, in a strange country, but our interest is piqued by a series of issues & questions that we must follow up.
We know he died at the Eastby Sanatorium which was established by Bradford Corporation to care for tuberculosis patients – the history of this convalescent home is quite well researched already. But, so far as we know, this is the only memorial in the local churchyard to a patient from outside the parish who died there.

What was Leopold’s own story – where did he flee from? And how did he arrive in England? How does his personal story fit in with the story of the thousands of Belgian refugees who fled to England at the start of the First World War?
What part did the Walton le Dale Wesleyan chapel play in taking him in? And why is he not buried in that part of the world? Who came to his funeral here in Embsay? Did he have any family?

We definitely need to find out more.

On Thursday evening, I gave a talk to the Skipton Historical Society on the iconography of the gravestones – using examples not only from Embsay, but also  churchyards across the Dales and other parts of the country.
The more I look at the imagery the more fascinating it becomes, particularly when I compare what is popular in different areas, how choices of the type of motifs changed over time, or was affected by religious affiliation.
Even though the imagery and styles of gravestones in Embsay churchyard are relatively modest and conservative, by comparison with some other burial sites, there is still much of great interest here.

The Tait memorial, for example, with its cornucopia of sculpted fruits and flowers, as a testament to his grief over the death of his wife and two babies. It not only gives us an insight into his personal feelings, but also into his religious beliefs – as a member of the New Jerusalem Church he would have been very aware of the symbolism of plants as expounded by the church’s founder, Emanuel Swedenborg (1668-1772). Hence the elaborate imagery.
The audience at the Skipton History Society, were very appreciative, which was nice, and had plenty of questions at the end of the talk, which is always gratifying. I hope many of them will be encouraged to look at churchyards with fresh eyes.

At the Upper Wharfedale Heritage Group’s AGM there was an opportunity to hear about some of the current projects being carried out by the Group.

Sue had 20 minutes to deliver a presentation about the Embsay Churchyard Project – I know all about the project being involved with it, yet I thought her approach was fresh and gave a completely different perspective. Inspired by the recently published essay by Nicole and Gareth in “Participatory Heritage” [see below] Sue focused on our churchyard survey’s use of digital technology in its various forms, showing how a small community heritage project can effectively employ digital photography, databases, and RTI.

One mention she made was of the use of Social Media - 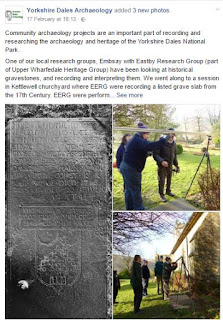 As well as our own Blog, we are now featured on Facebook on the pages of the Archaeology section of the Yorkshire Dales National Park Authority - our use of RTI at Kettlewell for a 17th C gravestone is on a post by Rebecca Cadbury-Simmons (dated 17 February 2017) - https://www.facebook.com/dalesarch. Thanks for the mention, Rebecca!


And thank you Sue for an excellent talk on Thursday.

After a break last week we were back around the table typing up more Grave reference sheets today. Every session we do we find ourselves chasing queries, wondering why so-and-so is buried with that other person, or why there’s no inscription for someone. Then there are anomalies to check against the church records. We find having the genealogical database invaluable in helping us out with a lot of these queries.

Well, Storm Doris wreaked havoc last week – A large tree blew down over the churchyard. Incredibly, like that old Buster Keaton silent movie where a building falls down and misses him, simply because he is where the doorway was as the wall falls over him, there’s a headstone that ended up totally unscathed in the narrow space between two big branches.


We’re not yet sure about the other headstones that are now under the branches, but we’re hoping when the tree is cleared away that they will be equally untouched.

We’re glad we have all the photos of the  headstones before this happened – so there’s another reason for doing the survey! It’s a timely reminder that graveyards are as vulnerable as any other heritage site to the vagaries of nature as well as intervention of people.