It was a hot, hot day.  Beautifully sunny despite the dire warnings of impending thunderstorms. The moths and butterflies were out in force today, emphasising how important such burial sites can be for wildlife. We did feel a little guilty about clearing away some of the vegetation, but there was plenty left elsewhere in the churchyard for them to retreat to.
Tony had brought along a petrol-powered strimmer which would work much better than the battery-powered one to clear away the thick stems of nettles and brambles from the frontages of the gravestones we wanted to record today. It took him all morning and it was extremely hard work, but he managed it. He did a grand job. 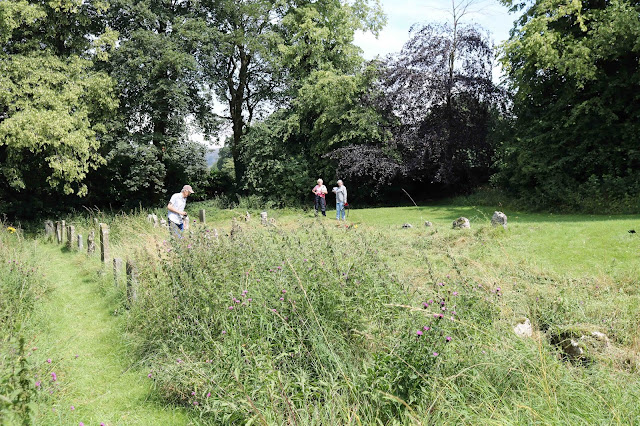 Meanwhile, Jennifer and I spent much of the morning preparing a particularly overgrown burial plot to reveal a memorial of the 1960s which has long since collapsed into pieces. We felt it especially important to do a good job not only for the photographic record, but also because it is obviously still visited by relatives who had recently left fresh roses at the graveside.
Sue and Lynne worked on the north side to record some of the newer gravestones there.


While having lunch we heard the thunderclaps approaching and decided to call it a day – none too soon, as we were battered by heavy rain on our drive homeward.