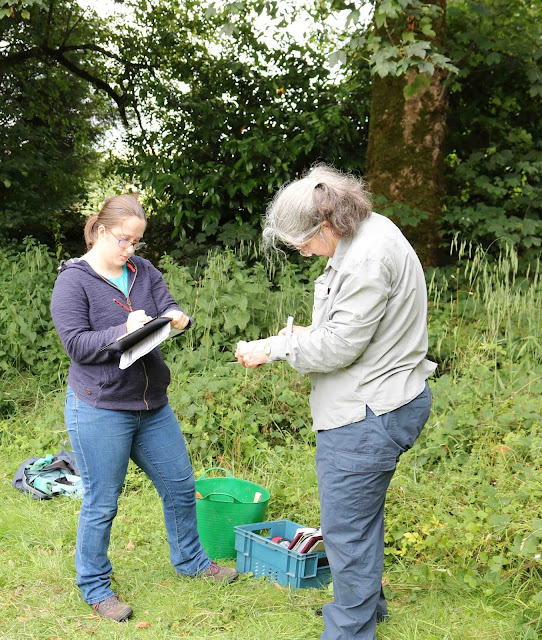 Again the weather forecasters got it wrong – we expected to be rained off by noon but although dark clouds threatened us, it never actually rained and we managed to get quite a bit done.
One of the things which has struck us is that in this churchyard the unevenness of the ground, and the sloping down to the west has created enormous problems with stabilising many of the gravestones. Modern memorials in particular have succumbed to collapse – many have not been fixed properly to begin with, and we have discovered several gravestones lying hidden in the undergrowth.
Perhaps then it is not surprising that the most recent burials tend to favour the local Wharfedale custom of using natural, undressed limestone boulders instead of conventional memorial uprights. Yet even here poor craftsmanship had led to the memorial plaques falling off and being lost on some of them. Poor record-keeping in the past has meant we have a large number of un-marked plots without any information on who was buried there – and where the plaques are missing even a few graves marked with the limestone boulders are as yet unknown. Hopefully we can find someone local who can remember who is buried under those at least.


Another local variant we have found here, on some of the more recent grave plots, is the use of long limestone pieces, again undressed and in their natural irregular shapes, used to form kerb surrounds.
Jane Lunnon
Posted by Upper Wharfedale Heritage Group at 14:54